My mother used to call me “lazy” on a regular basis, especially in my teen years.  Perhaps from her perspective, she was justified in her viewpoint.  She was born in 1908 and was a young adult during the Great Depression.  She often told me about leaving school in the 8th grade and going to work in the cotton mills because her family needed the money.  Yes, she definitely knew about working hard to survive.

The dictionary defines “lazy” as 1. Unwilling to work or engage in  energetic activity; indolent; slothful.  2. Moving or acting slowly or heavily; sluggish.  3. Conducive to or characterized by idleness or languor.

As I look back on those years, although I may have appeared lazy (not willing to make the effort), I’m not so sure that was the case.  One of the things I’ve learned about myself is that I don’t believe in wasting energy.  I believe in efficiency.  I’ve also learned that I’ve never really been a physically oriented person.  Most of my activity takes place between my ears.  (Man, if the activity there burned calories like physical activity, I’d weigh about 100 lbs!!!)  I’m not sure that qualifies for being lazy.

I’ve also come to the conclusion that adulthood holds enough hard work and responsibility.  Maybe a part of me “knew” what was coming and just wanted time to enjoy life as a teen.

Then there’s the word “effort”.  The dictionary defines it as, 1. Expenditure of physical or mental energy to get something done; exertion.  2. Something produced by exertion.  3. (Mech.) Force exerted against the inertia of a body.

I was (and still am) always ready to make the effort for something or someone that interests me.  I guess what interested me then just had nothing to do with what my mother expected from me.

So what, might you ask, has this to do with you or anyone else for that matter?  Good question.  Having had the possibility of having those traits caused me to become really aware of the actions of people in general.  As an observer, I began to notice a real change in people around the mid-80s.  Attitudes, especially in the next generation from my own, seemed to change radically.  Oh, people were still going to work, but they expected to get paid for doing next to nothing.  Please, don’t jump to the conclusion that I’m speaking of everyone.  There will always be people who work their fannies off, no matter what they are doing.  It just started becoming more and more prevalent that people wanted a paycheck without doing much for it.

Even though physical exertion has never been my long suit, I always believed that if you agree to do something (be hired by a company, let’s say) then you did the best job possible no matter whether you where digging a ditch or doing office work.  Hmmm…maybe that’s why I’ve always been so choosy about what jobs I agree to do.

I think what really shocked me was when I began teaching Wicca and training people to become Priests and Priestesses.  It’s one thing to have to  take a job in order to pay your bills, feed and clothe yourself and feel that you don’t need or want to put much effort into it.  To me, your spiritual path is a choice.  Why would you not want to put effort into learning about it and practicing it? (Scratching my head here.)

I’ve come to realize, over the years, that I truly do look at things differently than most.  Maybe, because of that, I’m being dense here when it comes to trying to understand the reactions of other people.  (It certainly wouldn’t be the first time!)

I became quite puzzled why people would come to our group, say they felt like they were “home” in Wicca, want to take the training and then leave in next to no time.  After a while, it began to feel like our front door had become a revolving door.   Was I being too tough?  The students who stayed didn’t seem to think so.

When I became coordinator of the 16 acres that became known as Raven-Wolf Nature Sanctuary, the lesson returned.  Although there were many who did come and work their butts off to help maintain the land, there were even more who wanted all kinds of things to happen on the land, but weren’t willing to lend a hand in manifesting them.  It was then that I really began to realize that, no matter the circumstances, people just weren’t into making the effort anymore.

I realize we live in a world where “shoulds” and “have-tos” abound.  I realize that much in our childhoods has made us rebel against the word “discipline”.   However, the reality of this plane of existence is that  before  enlightenment we have to “chop wood and carry water” and after  enlightenment we still have to “chop wood and carry water”.  It’s just all part and parcel of what we came here to be and do.  Also, it’s time to realize that discipline isn’t always punishment.  Many times the discipline that’s called for is, “Training of mental, moral, and physical powers by instruction, control, and exercise.”  It can actually be quite freeing if one is willing to make the effort.

Ah, there’s the rub!  Just as much as it might be some aspect of fear that stops us from venturing into the “unknown” and making changes to our lives, many of us have come to a place where if it takes the least amount of extra effort to effect change, we find an excuse or just plain don’t do it.  Why is that?  If your life is miserable and/or not what you want it to be, why would you keep doing the same things and expect different results?  That’s just not going to happen.  It takes effort and discipline to change the routine you’ve become so accustomed to and learn a new one.

I have both been there, done that, and continue to do so.  Some habitual actions are easier than others to change.  It was way easier, believe it or not, for me to quit smoking, after over 32 years, than it has been for me to change my internal dialog from being doubtful – sometimes fearful – to looking positively at my day-to-day life.  Both are very addictive. Both are unhealthy.  For me, the price of cigarettes was a motivating factor when I quit.  When I started smoking, cigarettes (as well as a gallon of gas for your car) was twenty-six (26) cents!  Yup, I really am that  old!  When cigarettes hit $1.25 a pack, that was enough for me!  Such is not the case with one’s own thoughts.  From a dollars-and-cents perspective, I don’t walk in and pay any cashier for the unhealthy thoughts I have each day.  Maybe if I did, it would be a whole lot easier to ditch that habit like I ditched cigarettes!!!

My point is there has to be real motivation in order for me and you to make the necessary effort to get rid of the stuff that’s keeping us from having the life we want and replacing it with things that do work.  The other thing that I have to remind myself of all the time is that I didn’t get this way overnight and I won’t change it overnight.  If I really want things to change, I have to make the effort, as many times as it takes, to do things differently.  I may fail numerous time, but if I really want to see change or accomplish something, I have to pick myself up, dust myself off and try again…and again…and again – you get the idea.

So here’s to you and here’s to me!  May we each find it within ourselves, no matter what anyone else thinks, to put one foot in front of the other and walk ourselves into the lives we really want.  As we Wiccans say, “As my will, so mote it be!” 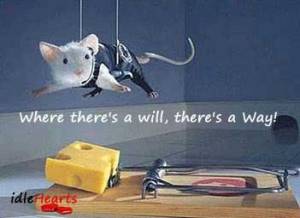 Transform your life with Astrology

Recipes showing step by step directions with pictures and a printable recipe card.

"We’re the dream that humanity creates to make sense of the shadows on the cave wall." - American Gods

Diary of an Aesthete

Safe Guidance For The Inner Traveller

"Within us is the old one who collects bones. Within us there are the soul-bones of this wild Self." Clarissa Pinkola Estes

~Joouna's blog about lots of stuff.

Astrology of the Soul

Cosmic News - Bringing you news from the Cosmos

what I think / what I say
SHEILA RENEE PARKER

Having a healthy body, mind & soul is what makes a healthy loving relationship. This is what Desirable Love is all about.

It started with a Big Bang : Ramblings about life, the universe, its images, and our place in it.

Restoring Roots. Revisiting the Past. Rewriting the Future.